I recently watched a video of my beloved John Oliver from Last Week Tonight talk some real logic about psychics and I honestly can’t say that he was wrong.

I’ll include the link to that video below.

The most important part of this post is that I want every single person who reads this to know that I whole-heartedly agree with what John Oliver showed in that video, and I still know without a shadow of a doubt that I am one.

The people he showcased were not embodiments of what it fully means to possess this gift. Because you don’t have it, it has you. The choice comes down to how you decide to use this gift. Are you using it to truly help others in the way that only you can, or are you using it to make money in ways that strip people of the dignity and respect they deserve?

I have many friends who use their gifts to be able to emotionally connect with people they’ve never met before. They would never call themselves psychics, though. They would define themselves in completely different ways.

I am completely allowing myself to be the butt of a joke in the pursuit of my truth. Because yeah, the ability to experience these things that we’ve all written off is honestly hilarious.

I wanted to be “cute” when I wrote this article, but I just couldn’t find the write words…. or do I mean right words?

I’m not actually a softie when you know me. I use my words to inspire the people whose language I speak. To let them know I speak the truth. That whatever I say, think, and do is in service of the truth.

I will never share my gift with someone I don’t trust. I talk about it on my public blog because it’s the right thing to do.

I am a psychic and my gift is my word. The price I pay for that gift is heavy. Heavier than I’ve allowed myself to dictate here.

I hate to break it to you, but I knew this gift would come on when I first heard the words to my all time favorite song. I used my gift to share everything when I didn’t know that it was wrong.

I use my words to write on this blog, and when I write I use my voice. For this gift, I have paid the price, and prove it with my choice. I have my husband’s grandmothers blessings, one from each side to be exact. One left this Earth the day he proposed to me, serendipitously while we were in Las Vegas at a Lady Gaga concert, as a matter of fact.

My gifts didn’t come to me when I saw how many people I could take advantage of through emotional manipulation. No, my gifts arrived in a dark, heavy box the moment I created boundaries with my emotional abusers. (Some might even call it a Pandora’s Box.) I walled myself in, read all the books, took all the antipsychotic medications for as long as I could handle it until I realized none of that was me.

All of that was this character I held onto from the times before now.

I’ve stopped drinking, ingesting any chemical I don’t understand the function and purpose of, drinking cow’s milk, and soon I will be giving up meat.

I’m not playing around folks, this is me.

As part of my gift, I was given free will and choice. The choices I make in how I use this gift are how you will know the difference between me and someone talked about on John Oliver’s show.

The Spirits I work with have allowed me to strike a deal. I must speak the truth, always, and my life will be a blessing. I will never use my gift to manipulate, I know too well how it feels. I will never pretend to know/be able to communicate with a person who passed unless you ask me specifically, by name, and tell me what you want to know. I do not use my gift to bother the Spirits with trivial things. And I also will never guarantee that I can connect to them. I have strict rules about the types of energies I allow to communicate through me.

I will never seek you out. Ever.

I might write a book one day to talk about how I got my powers. But I’d probably put it in a children’s book like Neil Gaiman’s “Art Matters.” A book I was guided to directly by my intuition a few weeks ago. 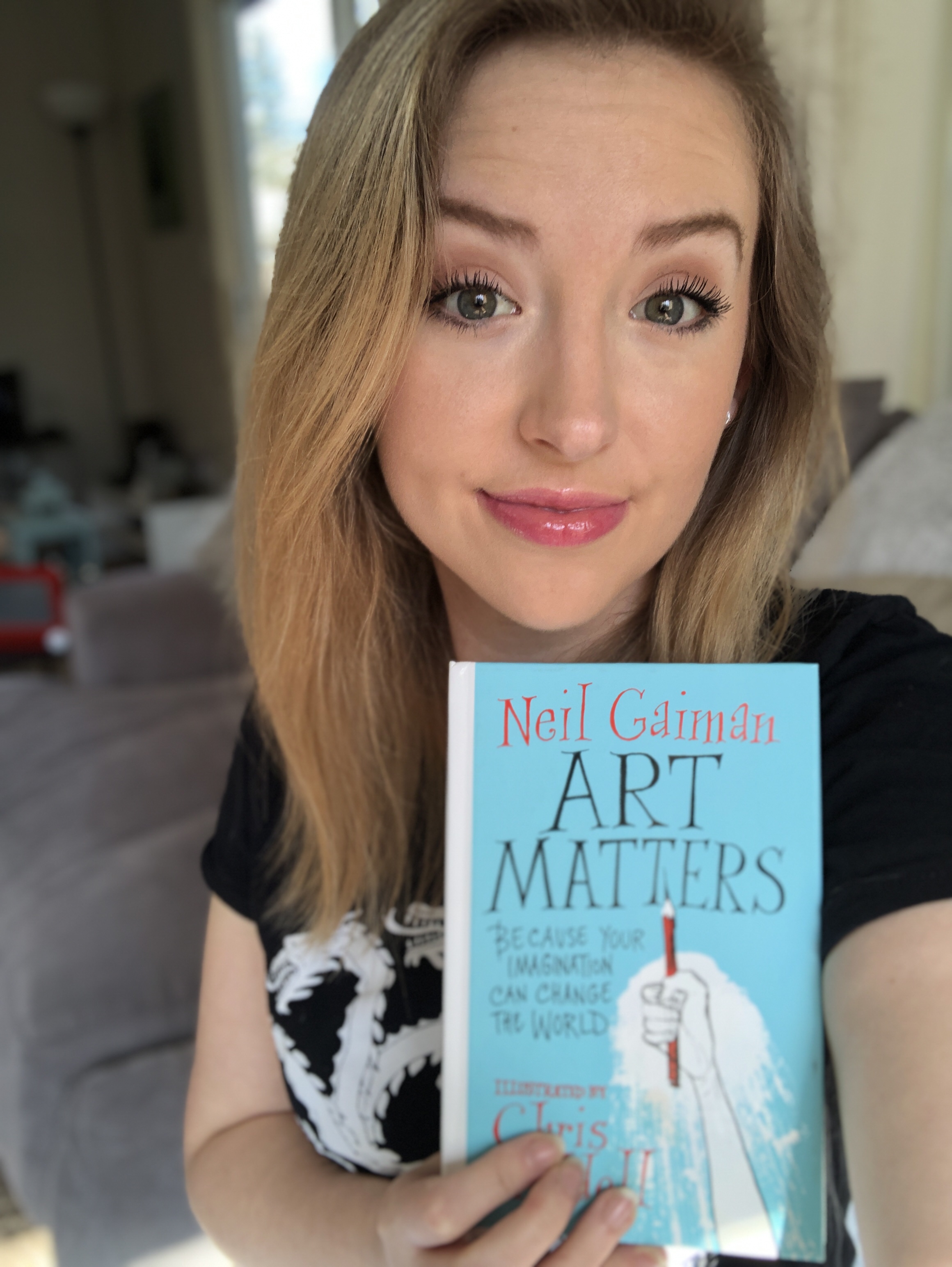 I wanted to verbally eviscerate the people featured on John Oliver’s show, let them know all the ways they’ve abused this gift and the sentence they will pay, but if they were truly psychic they would probably already know that… Unless they missed that day back in psychic school…

See, I’m no Gabrielle Bernstein, but I know the ways the Universe has my back. It’s only when I speak my truth, not when I pretend it. Not when I use vague words that fit just anyone.

The Spirits that guide me are only there when I tell my story to others who have learned to listen. Who have suffered alongside me, but lack the courage or conviction.

My gifts came to me after years of suffering, never fitting in, never feeling good enough, always waiting for approval. Well, I finally got that approval and you can’t buy it in a store. You can’t even touch it.

My approval came from within myself, the most powerful place I know. (I also got a tiny sprinkle of humility, if you can’t tell.)

I’ve been able to use knowledge of the past to help me create my future. I’ve been Divinely Guided to write every single post on this blog. I write about the things that matter to me, whether it makes me have a panic attack or not.

I write about my experiences because I know deep down I’m not alone, that every person who has read my words has been touched in one way or another.

I don’t write because it’s trendy or because I have any amazingly edited photos to show you. I use Instagram to filter my thoughts for someone who might find them there.

I speak to the misfit inside each of us, the rebel with the wide-open eyes, ready to take on the world.

I’ve avoided the writing that’s most meaningful because it normally cuts me the deepest. My words are my heart and soul, not some continuation of a fucked up money making scam available to a certain set of people.

I work a part-time job, tutoring students with learning disabilities like mine. The rest of my time is spent healing, learning, and writing. Writing is the only thing that keeps the demons at bay.

I call my gifts “psychic”, but maybe that’s not the right word to use.

“Intuitive” does the trick, but it leaves out a lot of the suffering I went through.

“Spiritual” won’t even begin to cover it, there’s far too much detail for me in that word.

How about if I called myself “thoughtful,” would that be enough?

What title is even available for someone of my culture to use?

I use the words Spirit sends to me, through the clairaudient messages I receive in my head.

But I’ve been brainwashed for so long to believe something was wrong with me instead of knowing that this was the exact gift my creator blessed me with the moment I took my first breath.

I believed it to be my curse. That I was better locked away in an asylum for the rest of my life than to ever be worthy of having knowledge this vast and powerful.

I’ve hidden these parts of myself for years, watching as it became trendy to talk about “signs” and “soul mates”, all while hiding in the shadows of never having the words to say.

I watched and laughed out loud as John Oliver spoke truth to the scammers who claimed to be like me.

And the moment my Spirits saw I was done laughing, they said, “We have a message for you to write. It’s going to take all the courage inside of you, my dear, so buckle up tight. You’re going to talk, in detail, about your powers so we can weed out the fakes. You won’t need to drag them or stomp them into the mud, you will simply set yourself apart from them because you ask for nothing in return for your pursuit of the truth… A diamond in the rough.” (Yeah, my guardian angels use Disney movie quotes A LOT. I mean, they are my guides we’re talking about, right?)

I feel an immense sense of moral obligation to do the right thing, I feel it in my heart and my gut. (Which is my internal guidance system, for anyone that doesn’t speak psychic.)

I often stumble on my path of truth. You know, like becoming unemployed for two years because I’m unable to speak the truth. So I choke it down and wonder where my anxiety came from.

I’ve sought help for my symptoms but the only thing that quiets the constant feedback loop of souls talking in my ears is creating. Sometimes it’s knitting, sometimes it’s making a meal, sometimes it’s organizing a drawer of clothes. But my favorite way to use my gift is to write.

Although, I am signing myself up for piano lessons soon, so I guess we’ll see if I begin to write something new.

So if you’ve made it thus far into my post, first I congratulate you. I’m long winded in my explanations, but I promise they’re worthwhile.

Next, I pose these questions:

What would you do if you found your purpose? What would that look like?

Would you charge people to have access to it? Or would you turn those people away, in search of something more?

Power and greed lie at the root of these scam artists. I’ve seen them at work in the overpriced “services” of many unhealed healers that I follow on social media. Real guidance and healing comes at a reasonable price because it comes from people who do the real work.

So if you’re still not sure if I’m just full of myself, ask yourself this question:

“Would I do this if I knew the truth?”

I’m waiting for your response.

Ever since I gave birth I’ve felt SO different from the person that I was. I think every parent goes through this - one day you are responsible just for yourself and then suddenly your entire world and life changes to include this new little person, and an entirely new life. It shakes you up, to day the least. Giving birth, for me, was one of the most liberating and empowering experiences I’ve ever had and, to be honest, I was completely terrified of what it would be like. Now that I’m on the other side I feel so connected to my body, the natural world, and the next steps toward my purpose here on this earth. I feel completely reinvigorated to reinvent myself and leave the pre-mom Jordan behind. There’s a lot of ups and downs in the early days of postpartum life, sometimes more downs than ups. But I’ve taken this time to be the doorway I walk through to learn about my daughter, myself as a mother, my husband as a father, and every aspect of my life as a new adventure to grow more fully into myself. #newlifecreatesnewlife 📸: @becca_reitz
%d bloggers like this: